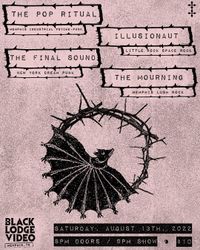 Illusionaut will be joining Memphis-natives The Pop Ritual for a spacey, industrial show that you won't want to miss. 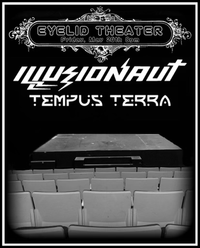 Illusionaut Live at the Eyelid Theatre

A private event hosted by Illusionaut Illusionaut will be shooting a music video at this event, masquerade and costumes are encouraged. Pre-sale tickets only, no walk up tickets available

After a 2+ year hiatus, this is Illusionaut's long-awaited return to the infamous Vino's stage! Featuring Memphis artists The Pop Ritual and Little Rock locals Skull Family

SAVE THE DATE - On Saturday, October 26, 2019 we invite you to join us as we once again INVADE the small town of Eureka Springs! This year, we will host a full day's worth of activities, so arrive early and take part in some frightfully fun festivities, INCLUDING: SATURDAY OCT 26, 2019:
-------------------------------------
NOON TO 2PM : Free THRILLER Dance Workshop with Melonlight
NOON TO 8PM : MACABRE MARKET on Center Street
NOON TO 8PM : ZOMBIE Makeup Artists in Basin Park
3PM TO 5PM : LIVE MUSIC in Basin Park
4PM TO 6PM : Pre-Parade MONSTER Meet-n-Greet
6PM TO 7PM : ZOMBIE CRAWL (PARADE) The Zombie Crawl is an amazing Halloween themed experience for the entire family, and includes a canned food drive for local area food banks. Brought to you by EZOMB LLC and the Eureka Springs CAPC!
Invite your friends and book your hotel NOW.
:)

Hailing from Little Rock, Arksansas, the space rock band Illusionaut will be hitting the stage in Denver with Scifidelic, the alternative post-industrial dance kick ass band. Joining them will be Denver natives I Married a Dead Man.

The Pop Ritual and Illusionaut

Thank you so much to all that made it out to support us in the semifinals! We are very excited to announce that we made it to the finals of the Arkansas Musicians Showcase! Come on out and show us some love!

We made it to the semifinals of the 2019 Arkansas Times Musicians Showcase! Come out for a night of great bands and great music!

Illusionaut with The Pop Ritual

Illusionaut will be returning to Growler's Memphis for a show jam-packed with musical talent and strange sounds. They will be preceded by The Pop Ritual, Crown Vox, and Admiral Longtooth. Doors open at 7pm, music starts at 8.

Taco Mouth from Nashville brings some rockin music to Memphis for their album release show at Growlers. Having their music produced by the master himself, Michael Wagener (Metallica, Skid Row, etc.) you can bet that this is going to be a show for the books.  Illusionaut is joining in to open up for them just a couple of weeks from opening up for THE TOADIES in Little Rock. They just released a new vinyl album that was mastered by Ken Andrews of the band Failure, Ken worked with bands like Nine Inch Nails, A Perfect Circle, Stone Temple Pilots, Tenacious D, Black Rebel Motorcycle Club, and Queens of the Stone Age) Local support coming soon too, so expect a night of awesome rock n roll from some spectacular bands at little ole Growlers. Memphis Represent!

It’s been 25+ years since the Toadies started playing rock music in Fort Worth, Texas. Through lineup changes, shelved albums, band break-ups, and reunions, the Toadies have experienced nearly everything. They burst onto the scene in 1994 with the breakthrough Rubberneck, including the singles “Possum Kingdom,” “Tyler.” Toadies returned to the studio in 1998 with the pressure of trying to match their first album’s success. That success didn’t translate to label support. “We got approval for a record,” says Vaden Todd Lewis, “ somewhere it got unapproved. So we went back to the drawing board.” Eventually some tracks made it onto Hell Below/Stars Above which came out seven years after Rubberneck. Disappointed and dejected, the band dissolved just a few months later. Meanwhile, “Possum Kingdom” never left the airwaves, enjoying constant rotation at modern rock stations. Fans clamored for a Toadies reunion. “The band never went all the way away,” says Lewis. A one-off show in 2006 became a full-fledged reunion and ever since, the Toadies have steadily built momentum. A third album, No Deliverance, came in 2008 and saw the band selling out shows nationwide while also playing Lollapalooza and ACL. The “lost album,” Feeler, finally materialized in 2010 followed by Play.Rock.Music. in 2012. In 2014, Toadies celebrated the 20th anniversary of Rubberneck. In 2016 Toadies released Heretics, an acoustic twist on classic songs. The band is currently finishing a new record with Rubberneck producer Rob Schnapf for a 2017 release. The Toadies (Dallas, TX) - http://thetoadies.com/
Recognizer (Little Rock) - http://www.recognizermusic.com/
Illusionaut (Little Rock) - http://www.illusionaut.net/

$20 advance
$25 day of show
All Ages
Standing Room Only

Join Illusionaut in celebrating the release of their new album "Snow Queen"!